Hello, my name is Sue Putt. I’m your new chair for the Companion Newf Committee. I have been owned and loved by five Newfoundlands. They’ve brought valued friends into my life, have forced me to step outside my comfort zone and taught me about unconditional love.

Currently, we share our home with three of them. Glory is retired, enjoying life as a senior and has taught me to stop and smell the roses. Henry is my anchor and reminds me daily why I love this breed so much. Truman is the puppy, a masterpiece in the making, and brings me a smile each day.

I’ve introduced different venues appropriate for a Newfoundland to each of my dogs. During this time of exploration and training, my dogs have surprised me with some of their own talents. 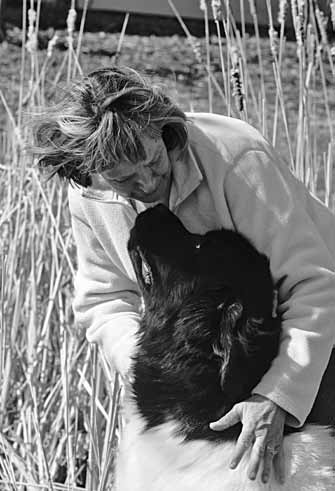 This story is about Henry, my little Landseer who has accomplished so much in his short life. Many of you know of Henry by his magnificent jumps at various water tests but there is another thoughtful side of Henry. I will share with you how I discovered this side of Henry and let that bloom into something very rewarding.

While competing at a water test with Henry, I noticed a group of young male teens accompanied by several counselors. They had been invited to watch the Newfies in the water. One of the counselors asked me if I would bring my dog over to visit with the boys.

Henry had just earned his WRD title so we were able to relax and visit with the group. We were quickly surrounded by an admiring group of boys. While cameras were clicking and questions were answered, I noticed one boy standing off by himself. One of the counselors kept encouraging him to join us but the boy kept shaking his head no, fearfully watching Henry.
Shortly later, the boy said, “OK, I’ll come over and have my picture taken but that dog can’t look at me.” I nodded my head in agreement to the boy’s request and put Henry in a sit. The boy came over and sat behind Henry with his back facing Henry’s back. Pictures were taken and the boy was praised for his bravery. While this was taking place, Henry sat still, facing forward.

Slowly, the boy reached behind him with his hand outstretched. With eyes tightly shut he started patting Henry’s back. Henry sat still, not even turning to see who was patting him.

During the hush that followed this exchange, I realized my hard-working young Landseer knew what this boy needed without instruction from me. I was determined to explore this further.

About a year later, Henry and I had an opportunity to interview for the position of a pet therapy team at our local hospital. My friend and her dog were a team but had to retire due to his advancing age. She was impressed with how calm Henry was in her shop—so with my permission, she put in a good word for Henry and me.

Henry passed his health exam and received the required letter of recommendation from his vet. She wrote about Henry’s willingness to have a class of visiting preschoolers sit in during his exam while he had his blood drawn and his ears checked.

The interview at the hospital took place in a secure room accessed by ringing a doorbell and having someone from inside unlock the door.

Our interview was with a group of seven people. A couple of them were eating an early lunch. Henry ignored the food. A few of them arrived late which meant they had to ring the doorbell for access into the room. One of them came hobbling in on crutches. Henry showed no concern with the ringing doorbell, the newcomers, or the crutches. 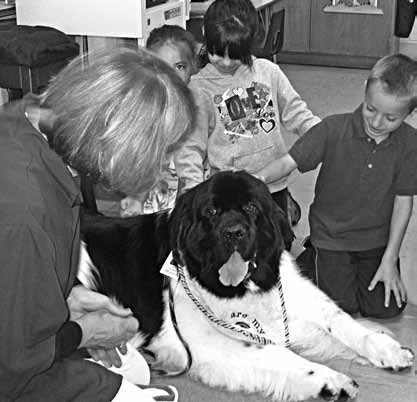 After the initial interview, our next task was a walk around the hospital for a meet and greet with visitors. We were trailed by an observer who watched as we managed ourselves with the growing crowd of people fascinated with the big white and black dog.

Upon returning to the interview room, we were congratulated on becoming the newest dog-handler team. I didn’t realize what an accomplishment this was until I was told the hospital receives over 200 applications a year for this volunteer position. The hospital maintains 15 dog handler teams that they hand pick and are very proud of.

I have a uniform and we both have picture ID badges that we must wear when doing our work. Trading cards were made up with Henry’s picture and his vital statistics. These are very popular with the young patients who like to collect them from all the pet therapy teams.

Henry and I are assigned to the Ortho Surgery Unit floor. Henry maneuvers very gracefully around walkers, wheelchairs and gurneys to bring smiles to patients and the staff. We occasionally get email requests for visits in other areas of the hospital. Henry has adapted effortlessly to many different kinds of hospital equipment and hospital noises. In addition to the main hospital, we are also assigned to the Pediatric Rehab center, an off-campus facility. Our patients are young and many of them have extreme physical challenges. Henry helps the kids forget about how much it hurts to stretch some of those muscles by letting them hug him, doing tricks for them or simply walking next to them while they are maneuvering a hallway with a walker, wheelchair or specially made bicycle.

Henry is now classified as an animal assisted therapy dog at the Pediatric Rehab Center. When writing up a protocol for their young patients, the staff includes a dog in the treatment plan…a big white and black dog.