Sing that to the Coca Cola song. I have, of course, made up several more verses about Kaloosit but this verse is the only one pertinent to my present subject. All of last winter (1974-75) Kaloosit was in the woods with me almost every day; during the preceding winter she was with me from the time she was old enough to keep up for a whole day. For me, working with Kaloosit has been a joy. I wish more newfy owners could watch a newf dig into the work for which newfies were bred.

I am a graduate student in the Department of Biology, University of Chicago, and since September 1973, I have been living in Upper Peninsula Michigan studying the fisher to obtain my PhD. The fisher is a large member of the weasel family. Consie and I bought Kaloosit (Valor's Ottawa Kaloosit) during January 1974, with two objectives in mind. We wanted a big dog for a pet and I wanted a dog that I could train to harness and pack to help me move my gear about in the woods. A Newfoundland fit the mold perfectly and Kaloosit became a member of the family. 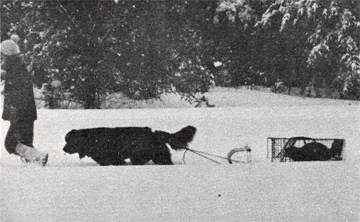 Neither Consie nor I had ever trained a dog for working before, but we had both had experience training other breeds in basic obedience. Capitalizing on ideas obtained in conversations, scattered reading on work and obedience training, and past experience Consie and I began what must be· called the "Powell potpourri method of dog training for home and work." Through trial and luckily little error (Consie has a knack for knowing when we go wrong before any damage is done) Kaloosit has learned everything necessary for her to be a perfect assistant in the woods.

The most time consuming aspect of my work is live trapping fishers. During most of the year the line of live traps I have set in the woods must be checked daily. During the winter, most of the area in which I work is inaccessible by car, so Kaloosit has learned to pull ft toboggan. When Kaloosit was about seven to eight months old I was able to obtain a sled dog harness that fit her. During the next few months we worked from wearing the harness thru pulling a small log to hauling a loaded toboggan. To be honest, little training was required, as Kaloosit retained the inbred ability and knowledge of the breed and knew exactly what to do. My only problem has been that her easiest hauling speed is a little bit faster than I can comfortably walk on snowshoes. When last winter began Kaloosit and I set the trapline reaching as far as three miles from the nearest road. Kaloosit would begin a trip with about 50-75 pounds of traps, bait, and sometimes my lunch (!) on the toboggan. I organized each trip so that the toboggan load gradually decreased during the whole trip, but Kaloosit never approached the point of being very tired. Because we set traps out during early winter, we had little trouble with snow depth; Kaloosit could easily stay in my snowshoe trail. As the winter progressed, I maintained snowshoe trails so that when the snow was so deep that Kaloosit floundered (maximum depth last winter: 36") she could still trot along the packed snowshoe trails. I was also able to utilize snowshoe trails to teach Kaloosit one sticky rule of hauling: don't turn around in the harness. The narrow trails made it difficult for her to turn around and thus easier for me to get the point across. The same sort of technique, but with two boards close together in our living room, was used to teach her to back up to the toboggan for hitching. 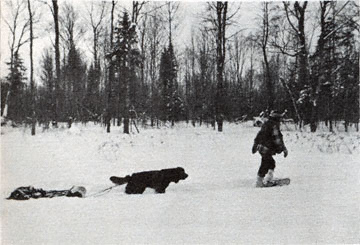 Once traps are set, checking them is easy and fairly quick when done on cross-country skis. The entire trap line last winter was only about eight miles long and we were always able to check it before lunch. Kaloosit was able to trot along the ski trails fairly well when they moved away from the original snowshoe trails. When a fisher is in a trap, I usually sedate it and gather data without leaving the point of capture. Kaloosit has been invaluable as a hand· warmer on sub-zero days. The fisher then has to be hauled out of the woods to be outfitted with a radio transmitter mounted in a collar and then returned to the point of capture. I have a collapsible sled, which is easily carried, on the pack I carry in the woods and Kaloosit uses that for hauling fishers rather than take the toboggan along each day. While working with fishers it is imperative that I have complete voice control over Kaloosit as unpredicted things may happen fast and I cannot afford to be encumbered with a lead on my dog. Complete voice control has other advantages. For example, while checking traps this summer I frequently caught skunks and porcupines. Kaloosit sits and stays almost without twitching as I let the animals out of my live-traps. One porcupine walked right under her nose and almost over her paws, yet she stayed still; a surprised start could have filled her face with quills.

A thought which may have occurred to many readers is "Wouldn't a snowmobile make everything faster and easier?" No. First, I have found that even though a snowmobile does go faster over the snow than a skier or sled dog, more time is spent loading, unloading, and maintaining the snowmobile than is saved. Second, a snowmobile cannot go down many old logging roads or thru the woods as well as a skier or sled dog. I actually save time by not using modern technology in this case!

Consie and I are developing a breeding program, which selects for working characteristics. Watching Kaloosit haul and pack has given us a very strong opinion about certain parts of the standard and we look critically at Newfs from the standpoint of how well they could work. Kaloosit was bred last winter and whelped in May (she worked till she outgrew her harness) and Consie and I are enjoying training the pup we have kept. He started going into the woods in September.

I hope that I have conveyed a feeling for what it is like to work a newfy. I do not feel at ease saying that Kaloosit is a real "working dog" because she only really works during the winter and neither her life nor mine depends entirely on her performance, but I feel that I have an idea of what a real working newf could be. I can never hope to convey the feeling I get while watching Kaloosit pull the toboggan or carry a pack full of gear. I get a deep joy from watching her work. With me she knows what she is doing and what I want. The natural way that a newfy bends into pulling a loaded toboggan has natural beauty; my words cannot express it.